He called me in the spring and needed his porch rescreened.  At the time I was busy and he wanted it done soon, so he found someone else.  Towards the end of fall he called again.  The someone else was a no show.  This time I had a few days open and I said I’d be glad to do his job.

The previous homeowner who built this porch had his own way of doing things.  Though not built to any building code, it appeared well supported and safe enough to work on.

I removed all the old nylon screen and plastic screen tracks.  The sill boards were made from regular pine lumber and were beginning to rot so I replaced them with 5/4 treated lumber.

Red 3/4″cedar strips were secured to the treated lumber sills, and then black aluminum screen stapled to that.  Another layer of 1/2″ red cedar was screwed to that to sandwich the screen between the two.

Aluminum screen and cedar are a good combination.  The manufacturer says do not staple aluminum screen directly to treated lumber as the screen may decompose.

The screen turned out nicely and is almost invisible. 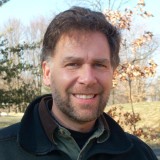